Join us for the 1st annual Sabira Cole Film Festival. This film festival ventures online for 2020, inviting viewers into a new virtual space that continues to bring the Pittsburgh community a curated collection of independent cinema from or about the African Diaspora. This year’s festival brings not just dynamic features and short films but also live events with filmmakers and local organizations. Find the full festival schedule here: SCFF2020

Stories about explorers, healers, and leaders. The films tonight are either made by, or lead by women.

About Yemanjá Wisdom from the African Heart of Brazil narrated by Alice Walker: Yemanjá is a documentary exploring ethics, social justice, racism, ecological sustainability and true power found in community and faith, via the stories of extraordinary elder female leaders of the Afro-indigenous Candomblé spiritual tradition, in Bahia, Brazil. In metropolitan Salvador, the Americas’ largest slave port during the trans-Atlantic slave trade, slavery’s brutal history was transformed into a vibrant religio-cultural tradition in Brazil, the world’s largest Catholic country. Candomblé is a brilliant example of resilience, profound dedication to one’s heritage and the forces of nature that sustain us all. In the face of tremendous planetary and humanitarian crises, these ancient wisdoms offer inspiration for our shared global concerns. 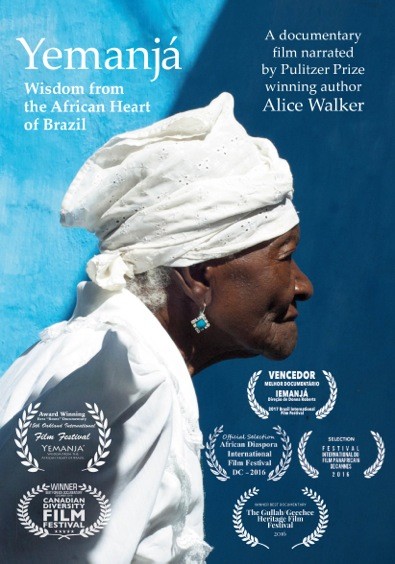 “Sabira Cole Film Festival is an international juried feature and short film competition. SCFF awards prizes to emerging filmmakers in the 3 categories: Geraldine B Hill Award for children & youth, Sabira Cole Award for short form documentary, Sabira Cole Award for feature narrative or documentary. We centralize storytelling traditions of the Diaspora and global communities of color to control our image and narrative. We support and magnify the voices of tomorrow. SCFF was inspired by the decade long Sembéne Film Festival and was created to honor the legacy and memory of its leader Sabira Cole.” –Ogechi Chieke, Executive Director SCFF